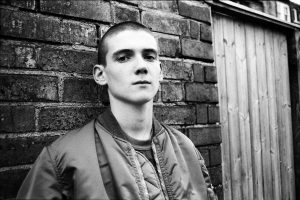 Contrary to popular belief, not only were the first skinheads not into racism and politics, but not all current-day skinheads are racists either. The “Mods”, as they were originally known in England in the latter part of the 1950s, were focused on fashion and music. Several years later, two groups of Mods (the Smooth Mods and the Gang Mods) split due to their differences. Smooth Mods wore the latest fashions, while Gang Mods (who were primarily working class) wore work boots, jeans and t-shirts. Most skinheads still embrace the wardrobe of Gang Mods, but have added tattoos to their look. The Gang Mods cut their hair short and became widely known as skinheads.

Racial issues became part of the Skinheads agenda in the late 1960s, when violence toward Pakistanis and South Asian immigrants (“Paki-bashing”) became prevalent as a byproduct of the Vietnam War. In the early 1970s, some skinheads aligned themselves with the Neo-Nazi group, The White Nationalist National Front. In fact, some Neo-Nazi groups were comprised mainly of skinheads. It was about this time that the words “skinheads” and “racists” became synonymous. Despite similar racial views, members of the Klan initially avoided skinheads and wouldn’t let them join their groups. In time, the Klan allowed skinheads to become full-fledged members.

Some skinheads have strong ties to Neo-Nazi groups such as the Aryan Brotherhood, as well as Outlaw Motorcycle Clubs. Racist skinheads that join a group usually choose a Neo-Nazi group; however, the majority of skinheads aren’t affiliated with an organized group. They remain independent, but socialize with other racist skinheads at events. There are a number of music festivals held every year that bring hundreds of like-minded individuals together. Aryanfest, Nordicfest, and Hammerfest are planned months in advance, and have several bands as entertainment. Smaller events are often held which feature one or two “White Power” bands playing in a local bar. Some skinheads join Neo-Nazi members in celebrating Adolf Hitler’s birthday on April 20th.

It is important to note that not all skinheads are actually racists. In fact, some skinheads formed “SHARP” (Skinheads Against Racial Prejudice) in 1987. Racist skinheads detest their non-racist counterparts, and often turn their anger and violence toward them. Non-racist skinheads tend to downplay or outright ignore those with racist beliefs.

Since the internet has arrived on the scene, skinheads have been able to communicate their views and beliefs, and also have an easy time connecting with like-minded individuals. Whether in organized groups or only uniting at social events, skinheads and their culture are alive and well in the United States today.